As we know, the issue of climate change and global warming is an important challenge that needs to be addressed in an integrated and holistic manner by all parties. Apart from environmental preservation initiatives and wealth of national biodiversity, the implementation and adaptation of sustainable development or sustainable development is now a key agenda in ensuring dynamic economic growth and minimizing carbon emissions.

In 2014, YAB Prime Minister announced that Malaysia had achieved a 33% reduction in carbon emission intensity from 40% achievement target by 2020. During the 2015 Climate Summit (COP21) held in Paris in December 2015, Malaysia renewed pledge to reduce the emission of greenhouse gas (GHG) emissions from Gross Domestic Product (GDP) by 45% voluntarily by 35% and a further 10% conditional by 2030.

Low Carbon City can best be defined as “a city that comprises of societies that consume sustainable green technology and emit relatively low carbon as compared with present day practice to avoid the adverse impacts on climate change”.

Low Carbon Cities Framework (LCCF) is an assessment framework or assessment guide in the implementation of ‘Green Township’. It emphasizes on aspects of Life Cycle Assessment and Performance Criteria as a measurement involving the emission of greenhouse gases (GHGs). LCCF is a system that calculates the level of carbon emissions based on performance criteria assessment that includes four (4) elements within the LCCF namely Urban Environment, Urban Infrastructure, Urban Transport and Building.

The purpose of the Low Carbon City are: 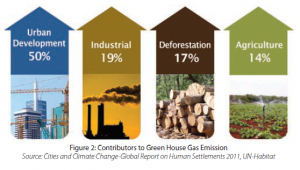 The above numbers indicate that more and more people prefer to live in urban areas. Cities consume energy, and are also centre where environmental degradation and effects of temperature rise can also be most felt. Urban development has been widely identified to be the main contributor to global warming, contributing 50% of total green house gas emissions.

The total greenhouse gas emissions increased by 45% in 2000 when compared with the 1994 levels. Malaysia’s emission of CO2 per capita which is about 7.1 tonne/capita was higher than the average for Asia Pacific of 2.6 tonne/capita based on the National Communications Report submitted by each country to the United Nation Framework Convention on Climate Change (UNFCCC).